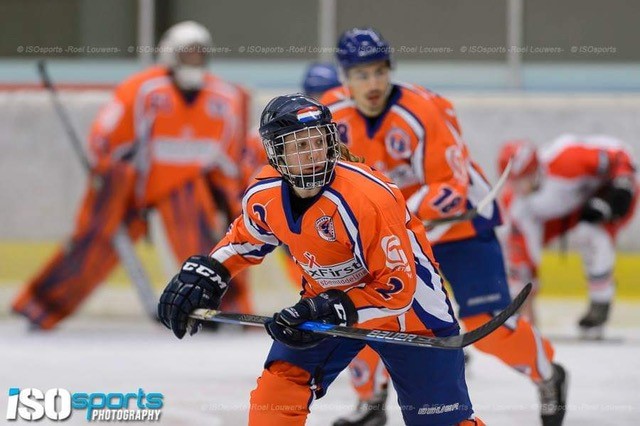 In an interview with ice hockey player Michèlle Noë, we discovered how CBD for celiac disease can provide natural relieg. CBD Tablets proved to be an effective way to keep the symptoms of this burdensome condition under control. Read about the personal experiences of a top athlete who can fully enjoy her great passion again thanks to CBD.

‘Hi my Name is Michelle Noë and I am 26 years old. I am born, raised and still live in The Netherlands.’

2. What Is Your Sport And Why Do You Like It?

‘My sport is ice hockey. This has been since I was 10 years old. Initially I started because my brother played ice hockey, so I had to be at the rink anyways. After the first practice I told myself that I would never get back on the ice like that. My entire body hurt and I had never felt that exhausted. When my coach came and asked me if I liked it and wanted to come back next week I did not have the guts to say no. Since then I have been hooked to the sport.’

‘First of all, ice hockey is a possibility not to take long thoughtful decisions. It is one of the fastest sports in the world. A decision has to be made within a split second. This is challenging for me as I tend to overthink. Secondly it makes me challenge myself every day. I have to compete in the male competition as female hockey in Holland is only recreational.

The male competition is tough. They are usually stronger and faster. So as a girl, you have to train even harder to be able to compete with them. This makes it possible to challenge yourself even more.

Last of all, the sound of your blades crushing trough the ice is like nothing you have ever heard before. A sound that causes instant inner peace. Whatever you were thinking about before will disappear in an instant.’

3. What Is Your Ultimate Goal?

‘Last year we -the national women’s team- competed in division 1B. This is the highest the Netherlands, women and men, have ever played on a world championship. We managed to promote to division 1A. This has been a historical ice hockey moment in The Netherlands as this has never happened before. In this year we will compete in division 1A. This is already a dream that comes true. My biggest dream is making it to the Olympics in 2022.’

4.What Is The Best Prize You’ve Won?

‘For sure the gold medal of last year on the world championships!’

5. Why Do You Use CBD For Celiac Disease?

‘In August 2018 I became very ill. I even couldn’t get out of the house. My doctor told me I had the flu but after more than a month we decided to do some blood checks. It took several months but in November 2018 they found some abnormal high antibodies in my blood. They suspected me to have coeliac disease but needed to do a biopsy to confirm. The biopsy took place in November but due to the holiday period I would only receive the test results mid-January. In January I received confirmation that I have Coeliac disease. A chronic disease that will be with me for the rest of my life. I will always have to be on a diet…’

Overtrained; ‘Furthermore they told me I had overtrained myself too because I did not stop training as I did not know I was ill then. I also had shin splints and bursa inflammation in my knee.
Before I got really sick, I did not recover properly from my training anymore. This got worse and worse until I got the “flu”. When I thought I had overcome the “flu” I started training again.

At times my body was so hurt after practice that I could not walk anymore. My muscles had never hurt that bad after practice. It usually took two days before I could walk again. The next training always came before I had recovered, but not training meant no game. No game meant no experience and no experience meant not making the National team. I had to continue.’

‘During this period I started using Supermedi CBD tablets 12 and 24mg. I was determined to make the National team for the World Championships 2019 in Beijing. I took it every morning 12 or 24mg depending on how much my body would hurt. In the afternoon, before practice, I took another one, mostly 24mg.’

6. ‘What Is The Effect Of Using CBD For Celiac Disease?

‘I used it in the doses I explained above. After I started using these tablets, my body could recover again. I could walk normally the day after my practice, participate in all the practices and play all the games. I did not get sick for days anymore after training or after playing a game. All the flu symptoms disappeared. I even participated in a training camp for an entire week 2/3 trainings a day. In that week I took at least three tablets of 24mg a day. Not going to the camp would have meant I could not be on the National team anymore.’

7. How Did You Get To Know The Brand?

‘My mom adviced me to take them. She gave them to me to try.’

8. Is There Anything Else People Should Know About Using CBD For Celiac Disease?

‘Especially in the time of my recovery this has been the best help I could have gotten. I have not experienced any side effects. There was no down side, the only way was up!’
Thank You!

Previous Post"Is CBD Already Available As A Medicine?" Next Post"The Most Frequently Asked Questions About CBD"