Home / Blogs / Other Cannabinoids Than CBD: What Is CBN?

Other Cannabinoids Than CBD: What Is CBN?

Hemp is a very special plant, because it contains a wealth of powerful cannabinoids such as CBN. While most of us are familiar with other cannabinoids such as CBD and THC, CBD is another organic hemp compound that could help support our health. Just like CBD, it can have a relaxing effect, but this effect comes about by different means than that of its famous cannabinoid cousin. That why this blog zooms in on cannabinol: what is CBN, and how could its properties benefit us?

Cannabinoids are substances produced by the bodies of nearly all animal species, including mammals, birds, fish, and even reptiles. As you may have guessed, cannabinoids are also produced by cannabis or hemp plants; hence the name. Cannabinoids can interact with the Endocannabinoid System (ECS), a system that continuously tries to maintain our homeostasis, which is the scientific name for the dynamic balance between all the different parts of our body. When your body is balanced, you feel healthy and in shape. If you fall ill or get stressed, you may lose your homeostatic balance. When that happens, your ECS will try to restore the balance for you.

Cannabinoids can interact with the receptors on the cells connected to your ECS. This allows them to send messages to your cells. Our body produces its own cannabinoids called endocannabinoids, but the ECS also reacts to the phytocannabinoids produced by hemp plants, such as CBD and CBN. This makes it possible to try and treat conditions like sleeping problems, pain, inflammation, or stress with cannabinoids. 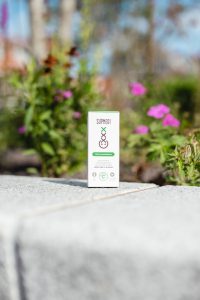 As mentioned, CBN is a phytocannabinoid just like CBD. CBN stands for cannabinol, whereas CBD denotes cannabidiol. All in all, the cannabis plant produces over 100 different cannabinoids. Although CBD is well-known, CBD promises to be another interesting cannabinoid. There are similarities between CBN and CBD, though they differ on several crucial points.

One of these differences is the way CBN influences the receptors of the ECS. Whereas CBD operates in a somewhat indirect fashion, CBN works more directly. The endocannabinoid system in our body has two types of receptors. CB1 receptors are mainly found in the brain and the peripheral nervous system, while CB2 receptors are located throughout the rest of the body, including the immune system, white blood cells, and the bones that make up our skeleton. CBN prefers CB2 receptors, though it can also interact with CB1 receptors.

Like CBD, cannabinol is generated by the hemp plant. It is predominantly found in mature plants, when THC ripens and gets broken down into new compounds. Under the influence of heat and oxygen, THC is converted into CBN, among other substances. Whether CBN has psychoactive properties is not entirely clear yet. Some investigations cite mildly psychoactive effects, but other studies claim the opposite. CBN does appear able to reinforce the euphoric effects experienced after using THC, however.

The Benefits Of CBN

Unlike CBD, CBN is not yet available in industry-level quantities. Part of the reason for this scarcity is the present lack of research into CBN and its effects. Initial studies do report that this cannabinoid offers opportunities for supporting our health, however. These are some of the potential benefits offered by CBN:

If you would like to try the potential benefits of CBN for yourself, we have good news for you. Although you can buy CBN if you know where to look, that is in fact unnecessary. After all, why choose a single cannabinoid when the effect of several cannabinoids combined can be much stronger? SupMedi CBD Oil and CBD Tablets are so-called broad spectrum CBD supplements. This means that all the important cannabinoids from the hemp plant are already present in our products. The one important exception is THC. THC is a cannabinoid that has psychoactive properties. That means it can alter your mental state and make you high. We carefully remove all THC from our products and have them lab-tested to ensure you can’t get high from our CBD (and CBN) supplements. This allows you to benefit from what is called the entourage effect: the effect of all cannabinoids working together amounts to more than the sum of its parts. Cannabinoids boost each other’s effect if you take them together. That’s why our products contain CBD, CBN and a range of other less well-known cannabinoids for maximum natural effect. Check our webshop for our high-quality CBD Oil, CBD Tablets, CBD Gummies, and many more supplements.