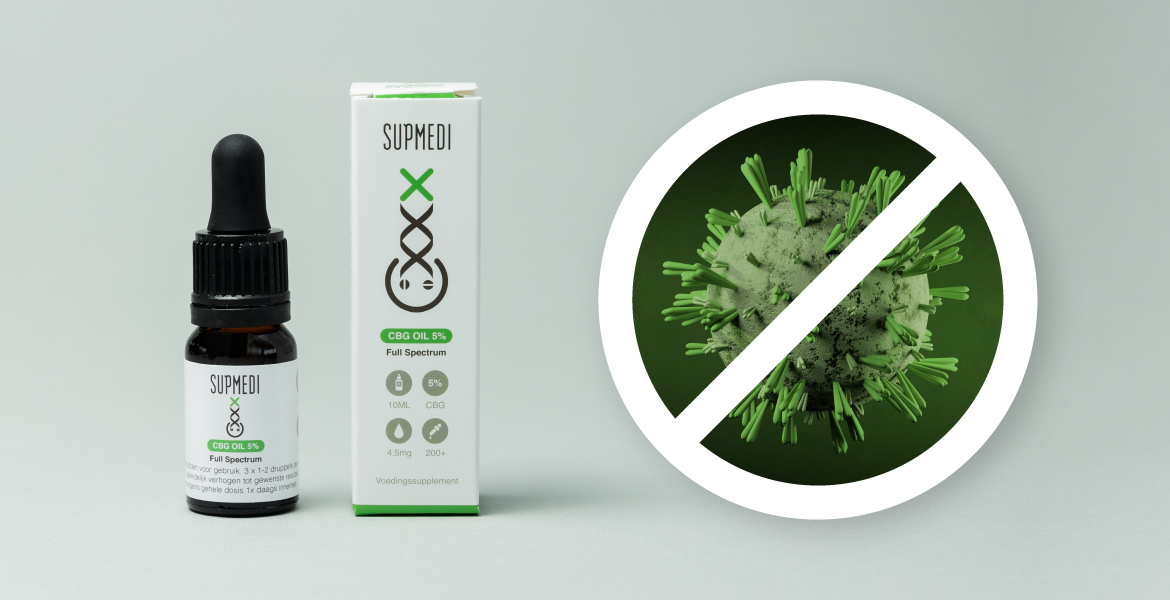 Nowadays, the resistance of superbugs to antibiotics is becoming more and more alarming, especially in hospitals. Bacteria mutate rapidly, exposing the population to the risk of epidemics and potentially lethal infections. Faced with this scourge, researchers have discovered that cannabinoids, and in particular CBG Oil (cannabigerol), have powerful anti-bacterial properties capable of combating multi-resistant pathogens. Is CBG Oil likely to help in the fight against bacteria? Read this blog to learn more!

Is CBG Oil our ally against super bacteria?

According to global statistics, about 25% of bacterial infections are resistant to antibiotics and this figure continues to rise despite ongoing progress in medicine. As soon as an antibiotic is administered to treat a disease caused by a microbial infection, the bacterium evolves to defend itself and quickly becomes resistant. Because of the capacity of bacteria to mutate, there is a constant need to create new antibiotics and sometimes combine several antibiotics, which is not without risk for the patient. And even then, victory over the bacteria is not guaranteed. It seems antibiotics are about to lose this battle against bacteria sooner than later. And dramatically, more and more patients are losing their lives because treatment for a microbial infection could not be found in time.

This failure of modern medicine in the face of mutant superbugs does not bode well in terms of a pandemic. To address this threat to the health of populations, researchers are constantly exploring new avenues in the hope of finding effective and reliable treatments. Cannabinoids such as CBD (cannabidiol) and THC (tetrahydrocannabinol) have been the subject of serious studies to confirm their medicinal properties for many years. CBD oil is an increasingly popular hemp compound to support a vast array of conditions such as depression, inflammation, asthma, diabetes, and skin disorders, to name a few. And more recently, CBG Oil has attracted the attention of medical research because it seems to demonstrate the promising therapeutic potential to fight super bacteria.

The hemp plant has more than a hundred cannabinoids in its composition, in addition to terpenes and flavonoids, which thanks to the “entourage effect” contribute to better health and well-being of a growing number of CBD and CBG users. It is now well-researched that cannabinoids can bind to the body’s cannabinoid CB1 and CB2 receptors in the endocannabinoid system and thus positively influence many physiological processes. Cannabigerol (CBG), although present in minimal quantities (1%) in the harvested cannabis, is a precursor of these cannabinoids and rightly deserves the name of “mother of cannabinoids”. Little known until now because of the difficulty of its extraction, CBG is a non-psychotropic cannabinoid that seems, among other things, to possess particularly convincing properties for the treatment of microbial diseases.

MRSA (Staphylococcus Aureus Resistant to Meticillin), also known as staphylococcus aureus, is a daunting bacterium that in some cases can cause toxic shock and even be fatal for the patient. Mostly present in hospitals and extremely contagious, MRSA represents an increased danger for patients with a deficient immune system. Super bacteria such as MRSA have the characteristic of being resistant to antibiotics and some may even be multi-resistant to any antibiotics. And according to the World Health Organization, patients infected with MRSA have a 64% higher risk of death than those infected with a non-antibiotic-resistant bacterium.

A Canadian study on cannabigerol

Research is underway to address the ineffectiveness of antibiotics and find new weapons in this battle occurring at the heart of modern biology. A canadian study on the antibiotic properties of cannabinoids was conducted in 2020 at McMaster University in Hamilton, Ontario, in which the antibacterial potential of CBG was demonstrated. During the study, researchers observed that cannabigerol has been able to annihilate Staphylococcus aureus as well as several bacteria that are hyper-resistant to antibiotic treatments. CBG has also been shown to eliminate resistant MRSA biofilms from skin or medical implants.

During this study, researchers also tested the ability of CBG to kill gram-negative bacteria, super bacteria that are listed by the World Health Organization as being particularly resistant to antibiotics. The result showed nevertheless that CBG alone was not enough to kill the bacteria. But its use in combination with a common antibiotic (polymyxin B) made it possible to overcome these pathogens present in many infections.

CBG Oil vs bacteria and superbugs

Although the results of these studies are mostly conclusive, it is still too early to consider CBG as a recognized medical treatment in the same way as antibiotics to fight against super bacteria. However, research continues to be encouraged by these early studies. Hemp and cannabis plants naturally produce cannabinoids to protect themselves from bacteria and fungal infections, which explains their antibacterial properties. This exceptional potential may provide some hope for preserving humanity from bacterial threats, but it will take many more studies before CBG is recognized by the World Health Organization as an official antibiotic treatment.

What is the medical potential of CBG and CBD Oil cannabinoids?

CBD, the other well-known non-psychotropic cannabinoid, is widely distributed and recognized for its medicinal properties due to numerous studies that have confirmed its effectiveness. CBD oil can relieve many ailments and CBG seems to be particularly suitable for antibacterial control but also, to strengthen the immune system, stimulate appetite and promote restful sleep. The combined use of those two green healing agents offers a natural solution to health deficiency where allopathic medicine fails to give a proper response. CBD oil and CBG oil as an efficient tandem is an interesting option to multiply their effects by the “entourage effect” mentioned earlier. The effect of cannabinoids and terpenes is mutually enhanced when they are used together which means that the combination of CBD and CBG has an untapped potential that deserves to be studied.

Regardless of the conditions that affect you, CBD oil and CBG oil have the potential to contribute to your well-being as evidenced by a growing number of users. Our exclusive premium full spectrum formula CBG oil tested by an independent laboratory is available in our online shop as well as our CBD oil full spectrum and our CBD tablets. Although CBG is very rare and requires expertise for its extraction, the SupMedi experts have developed an elaborate technology for an effective extraction of CBG from specially cultivated hemp plantations.

And for supporting your health while enjoying our delicious products from our high-quality nutrition line, you might be tempted by our CBD Candy and CBD Chocolate. And to start your day on the right foot choose for our CBD coffee and CBD oatmeal for the whole family. So don’t hesitate to do yourself some good and read our blogs to know all the benefits of CBD and CBG.